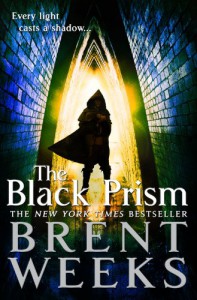 This book has a pretty standard fantasy story line: Young boy, who thinks he is nobody and treated as such by everyone he knows, finds out he is special due to his birth or has powerful magical abilities and is thrown into the danger and politics of the elite in his world.

So we are all familiar with this tale. I mean...isn't this also the plot of Harry Potter? So Kip is introduced to us in the middle of his town being razed for defying a local King looking to gain power and land. Kip is ordinary and not so special, except in the fact that he is fat and dumb, and not worth much of anyone’s attention, according to him. He is a bastard, raised by a drunkard mom, and has no idea about the identity of his father. He then finds out he is the son of the most powerful drafter in the world and that he too can draft, and he is pretty strong. We also meet the Prism, who has a HUGE secret and a secret mission that drives him and all of his actions through the book. He is pulling the biggest con in existence, and you can’t help but admire and root for him. .so there are several threads of secrets and lies and action going on. I liked the two main characters. Kip was very relatable. And the secondary characters were all interesting....so even if things became a bit predictable...you did not mind so much because the characters made it enjoyable. In the end…the book is about relationships, and how secrets and lies can lead to mistrust and misunderstanding. And those lead to disaster.

To me what made this stands out a bit more than anything is the unique type of magic that was introduced. I am always happy when writers think out of the box with sources of magic, like Brandon Sanderson with his metal magic in the Mistborn books. This series uses color magic. Some people in this world are born with the ability to draft. And they can either draft one color, two or more, or in a very unique case, draft all the colors and that person is designated "The Prism" because of course that makes them very powerful. So he is the defacto leader/emperor of the land. With limits of course. This kind of leader will need checks and balances.

What colors you can draft and how many, also determines your social class within the magical society. Monochromes are less than Bichromes who are less than Polychromes, etc. So everyone has a place, and everyone in their place, which is one of the major conflicts explored in the book. The magic is also tied into a God, who is thought to have gifted people with these abilities. So there is religion and religious zealotry involved as well.

What I also liked is that this magic has a huge price. Drafters don't live long. Drafting slowly kills them, and at some point they burn out and they either die by their own choice to prevent going mad, or go mad and end up overdoing it, and turn into a colorwight: an unbalanced, deformed monster. Magic is not some never ending resources that solves everything...it has a heavy price.  I kind of prefer book with this idea, because if magic is this unstoppable force...a story can becomes boring and even more predictable.

But overall...I enjoyed this book a lot. It was pretty solid, and I liked everyone enough to continue the series.